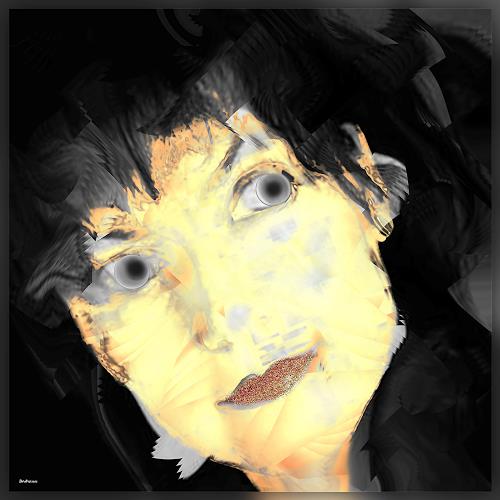 Portrait
It was something like that, like portraits in the change of history,
at the end of the day with the digital portrait.
People and personalities play no part in my portraits. Should A viewer mean, to recognize yourself or someone else is based on good imagination. Similarity is generally based on association, which is widely accessible in the Collage.
The starting point is nevertheless the randomly selected portrait photo, whose inspiration is important to me.
Similar to words (Arnulf Rainer, Gerhard Richter), the starting point is often only as pre-existent material in the composition.
Instead, the distortion of a wave filter through a mask provides the depth in a new quality and a rich structure, amazing results, which can also be of, satire or parody.
It also uses effects that contribute to the affect content of composition and so the viewer can make comparisons, impressions and moods.
I would like to refer to the stylistic used as an expression of the enthusiasm in the what's how I went to the net for a while, which is fishing as a gimmick with optical network in a series of work after attention of the viewer...
I wish the friends and the new viewers much joy.