Zurück
It is extraordinary difficult to explain the process we relate to our professional realization -especially when it is about such a complicated and many-sided part of human activity like art. As a matter of fact, everything is individual and just there is the charm of pursuit with drawing in general, but the opportunity to be yourself, the opportunity to express yourself in a universal language, the opportunity to create and destroy your own worlds - all that gives the satisfaction which can be compared to very few things in this world. If I have to define in some curt way the works I make I would call them just “another world”. This is a place of strange rituals with no gravitation, a world where everyone can find a favorite personage, a place where we stare with astonishment to the starry sky and find our constellations owing to the insight and the subconscious impulses. The works are "strange"- combining shapes stylized up to a sign, flying letters, objects known unto pain. An enigmatic world that invites you to puzzle it out like a new just discovered fairytale someone has passed in his childhood God knows how. The pure colors / sometimes childish naive/ allure, the personages - strange - reminding about something familiar. The chamber influence of the space gives the feeling that everything happens at a stage, and the staging has been directed and played by the imagination of the onlooker himself. There are many things that provoke me - ancient myths, legends - written and told, a pattern on a museum exhibit. The real, instinctive accumulation of historical events and artifacts in the consciousness, the need of historical support and the realized idea that nothing in this world is in vain but has remained in some way in each of us and is regenerated in time. Far be it from me to create illustrations of concrete legends - here comes the memory, the feeling, the allusion - to this effect the names of the works are purely symbolical - they just push the onlooker into a specific direction - all the rest is creation of his brain.
I prefer to work with oil paints - they give the opportunity for longer processing /for they dry more slowly/, which should not be neglected, especially when one emphasizes on a more detailed working up the spots. The bases are exceptionally smooth /they resemble paper/. The bases I use are canvas and a board - there is some difference between them /as for me/ and hence the attitude to the material is different. The work on canvas requires a more precise development of a preliminary design and a more careful laying the saturated tones, having in mind that the composition has been specified in advance and it only has to be carried out in material. On the board I work without preliminary preparation - everything is done at one go - to the letter in some hours and it means the works are more expressive, filled with more emotion and nerve.
The question about the frequent change in the way of expression does not exist for me -in this regard I rely on intuition. After gathering impressions things provoke the changes themselves. The tonalities I use are also purely intuitive selected - sometimes muted to the lowest vibration of a particular tone, sometimes chatty, frisky like a child drawing. I don’t protest either against reflection and routine or against impulse and whim -and I do not recommend it to anybody - we should not forget that the author is responsible for his works mostly to himself , and the others’ approval is something relative - all the same, some specific emotional mood and superstructure for the perception of a concrete author is necessary, and this is not always possible, but this is another topic.
Georgi Demirev 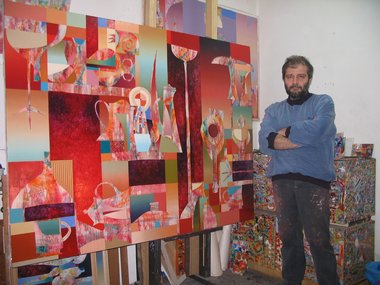