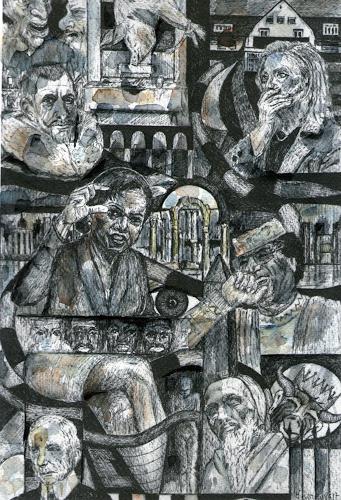 It´s about today`s discussions about politics, fake news and history as something which I think should be considered as a continuing process, trying not to negociate any possible perspective, to maybe come a little bit closer to something like truth. At the start of this series of meanwhile 28 drawings there was the idea to create works based on fineliner drawings then overwork the originals with watercolors. Finally those drawings were strong enough I thought, so I didn`t work them out further more. Each drawing took about a week and developed such a worthyness to me, I didn´t want to sell them anymore. So I decided to print them on the same Aquarell Paper on which I drew them and overworked the prints with watercolor. These works are, because of the overworking, Originals too, and are available now.