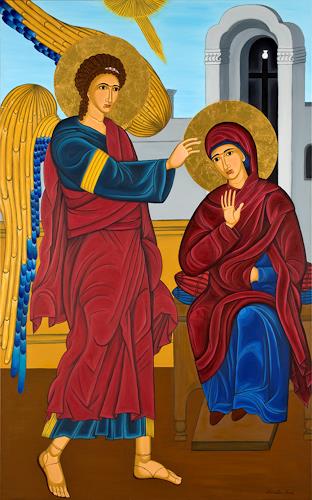 The 3rd in this series is a Byzantine image which is a clear and simple message of truths which I hope still has value for us today as they did then, the miracle called birth and respect for the pregnant woman. The Byzantines saw art very differently than we do today, for them art was capable of healing, of performing miracles and offered protection, for example, during the invasion of Constantinople in 1453 they walked around the city walls with icons in an attempt to protect themselves from the Turks. I must say here that I have sold some of my icons to people who still believe in those ideas, however, my point here is to remind the viewer that for us life starts with a woman becoming pregnant and that must be seen as a miracle in its self. My Maria is holding her stomach, something that has never been done before, and I did that because as a woman who has been twice with child I am sure that she already knew she was pregnant, therefore the blessing of the Archangel Gabriel is for all mothers. It is a blessing which offers to protect and defend women in a moment when they deserve the utmost respect from our society. But do they?