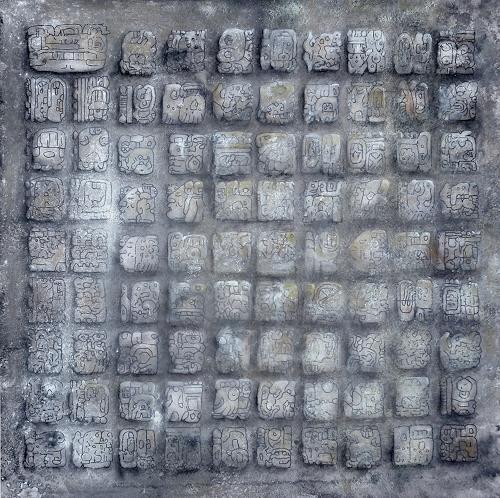 Obsidiana Jaguar is a Classic-Period Codex of the Maya Civilization.
This text more properly belongs perhaps on a tribute stela that Raúl interprets artistically.
McNelly has provided, thankfully, a narrative translation of the text:
On 9.19.3.3.4 (August 9, 813) Flint Jaguar of Minal was born. His mother, Lady Red Mountain,
was a woman of the upper aristocracy. His father, One Jaguar, the ruler of Minal,
lived to be at least 59 years old. One Jaguar had taken a captive, White Heron, who [was]
important enough to be mentioned in his titles. After his father’s death, which took place
when he was 19, Flint Jaguar became thirteenth member of his lineage to be seated as the
ruler of Minal. As part of his accession ritual he called forth a spirit (k’awil), possibly by
means of bloodletting.
Approximately 17 years later, Flint Jaguar took part in ceremonies to commemorate the
completion of the first k’atun of the bak’tun by scattering sacred drops and performing a
ritual dance with a hasaw-chan, a ceremonial banner that decorated the ruler’s palanquin.
Approximately 2 years later, warfare