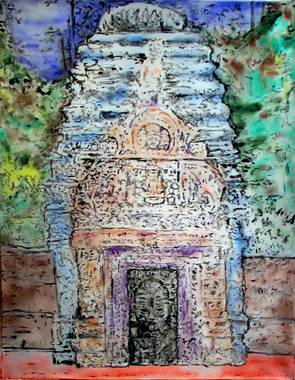 Shankar Art challenges the viewer to penetrate one's own being. It is only through this knowledge of the inner self that one can open to Shankar Art.
Let us enter the Sumi-e doors where we see the exuberance of the playful mind teasing the viewer to float, as if without a body, in fields of color. Boom! We open the vortex of the Black Kalas and are hurled into the depths of space. Our imaginations are challenged as we view images ordinarily seen only from some astronomical observatory. New, expanded universes open for us to view and explore.
Shankar Art speaks of Sumi-e and the magic of "the hand that is quicker than the eye." The spontaneous brush space and energetic color open the door and create a place for other unexpected adventures. Calligraphic gestured strokes and atmospheric impressions bring inner peace; shanthi. What subliminal message runs at the core of Shankar Art? We see signs, symbols and markings that indicate a realm we know intimately within our own being, yet never acknowledge as a sphere in which others might share the same feelings and sensations. From the markings, we begin to see networks and webs of structure that become rediscovered mirrors of our own minds. Current after current of this river of consciousness has been captured in Shankar's Sumi-e language, causing us to wonder about the artist and his experience as recorder, chronicler and reporter from the landscape of the inner mind.
What inner awareness does one need to approach Shankar Art? Imagine the time (kala) devoted to creating this art. Recognize that in taking time to study Shankar Art, we may be inspired to find a moment of peace within ourselves. This "time-taking" will also reveal the viewer's own power to create, to transcend ordinary expression. In our examination, we discover metallics here, metallics there, explained by Shankar as higher notes in the scale of the color palette acting in this play of transcendence.
In Shankar Art we see an ever-expanding window that reaches far back into human antiquity for its very basis of thought and being. Both Buddhist scholars and thoughtful students of the Adi Shankaracharya and Advaita will find these philosophies camped together in Shankar Art. Shankar reveals the divine as if by automatic writing or speaking in tongues. The brush moves as the artist witnesses. Nothing is planned; it is a matter of being present in the eternal moment.
Does this art really transport people beyond the ordinary mind to some special space? History will tell. We do observe that, in viewing this collection, we are touched in a way we do not expect. These paintings are like deep memories that are brought to consciousness for the first time.
There is joy in being the cargo in the hold of this ship, the SS Shankar. But where is this ship and its cargo headed? It sails through yatra, yantra and mandala and to the image-rich land of India with its own fanciful tales of enlightenment and guru teachers. At long-last we are docked in a port that forms a cultural bridge between the ancient roots of the rishis of the Himalayas and the cyber shores of modern western civilization.
To understand the quality that sets this artist apart, we must look back some thirty years to 1967. The TM movement had begun; the Beatles were sitting in Rishikesh trying to still their minds and the horrific Vietnam War was constantly in the news reporting the ever-rising death toll. Young Shankar, opening to a new world, found richness and meaning in meditation, the yogas, vegetarianism and Gandhi's faith in non-violence.
At an innocent young age, Shankar heard of the great yogis of the East for the first time: Yogananda, Bhaktivendanta, Ramakrishna, Ramana Maharshi, Meher Baba and the wonderful Babaji, the eternal yogi. Stealing away in the back of a hippie truck, Shankar traveled west with a band of self-proclaimed, American yogis. As they crossed the country, these seekers spoke of Edgar Cayce's predictions and the end of the world while searching for a deeper meaning rooted in the spiritual. Scouring the Rockies, it was as if they were led by the spirit, to the Lama Foundation, high on a mountainside in Northern New Mexico. Here the touch of Neem Karoli Baba came into play; call it the enlightenment factor. Once touched, his story was no longer of life's mundane activities but of the possibility of the expanded aspect of human behavior known as enlightenment.
After Lama, the quest continued, Shankar's vision turned naturally then to India. He chanted the Hare Krishna mantra and had his first practice of devotional murti worship. He traveled with other like-minded aspirants, complete with UFO's, and kept company with all the books channeled by the masters: the Akashic Record, the Lemurian Records in rock crystal, Urantia and Oashpe. At 17, Shankar was reading his way through occult wisdom like an unaw
Home,Lingam,Yatra,Yantra,Mandala,Black Kala,MahaSamadhi,Sumie Doors,
Advaita Miniatures,Nada Series,Yog Mountain,About the Artist,Favorite Links,
Contact Us,Key Kover.

Welcome to Shankar Gallery, where Asian art and mysticism meet Western innovation. Living in the glow of the Rocky Mountains, S.S.Shankar is a Yogi known for his vibrant artwork, his deeply soulful writings, and his attentive skill as Siva Lingam Pujari. Now, Richard Lazzara unveils his 108 visionary paintings.

Yatra Series
In a kaleidoscope of variety and versatility, S.S.Shankar employs representational and abstract styles to speak of a philosophy that is as old as Mount Kailash and culturally ancient as Arunachala Mountain.

Collectors and admirers alike have been inspired by the traditional Indian themes that fill his work, images which lead the viewer to an experience of the world's divine energy. Here you will find holy temples, spiritual luminaries, and scenes that include modernity's greatest wisdom teachers: Neem Karoli Baba, the Dalai Lama and Papaji, to name only a few. His Yatra series guides seekers into these special realms, bringing them on a colorful, visual pilgrimage to the holiest cities and temples on earth.

In other collections, S.S.Shankar takes a freer, more abstract approach and the results are exhilarating; Mandala, Black Kala, Mahasamadhi, Advaita Miniatures and the Nada Series all provide visions into the depths of infinite truth and universal divinity. Each one of the collections consists of twelve paintings, and every painting is annotated by a passage excerpted from "Yog Mountain, Rivers to Sea", the book of poetry and memoirs written by S.S.Shankar himself.

To begin the tour of Shankar Gallery, open your mind and enter the Lingam series, a celebration of the ultimate creative force in the universe.

Lingam Series
Next, take a virtual pilgrimage and visit the Golden Temple in Varanasi, Nepal's holy site of Pasupati. Or look to the pastoral Chitrakoot for inspiration. Twelve spiritual destinations await in this sacred journey.

To further your exploration of S.S.Shankar's work, as well as the potentiality of your own spiritual experience, focus your attention on the Yantra series. These multi-dimensional images invite meditation and compel you to contemplate your own place in the universe. Meditate on the Mandala, a painting inspired by the ancient circular objects of meditation. The Mandala will encourage you to go within and discover the Buddha who resides in each of us.

And then dive into the Black Kala - S.S.Shankar's expression of the infinite void - where swirling vortexes of color and sparkling lights convey the almost incomprehensible expanse of total time and space.
Mandala Series

Each commanding six by ten foot canvas brings you face-to-face with the concept of the potential of one's ultimate liberation. Gazing upon Mahasamadhi - great awareness - you will encounter the awesome presence for which there are no words.

Sumi-e Series
Open S.S.Shankar's Sumi-e Doors. These 66x38 inch paintings push open the portals, letting in the pure wonder of creativity. With energetic bursts of color and spontaneous brush strokes, you will see that these Sumi-e doors actually open into the limitless expanse of life.

The Advaita Miniatures tempt us to look closely and carefully at the world of detail and introspection. Modeled after the age old question, "Who am I?" these "worlds in a microcosm" bring the viewer back to the Self inherent in All.

S.S.Shankar's skills in multi-media techniques are revealed in the Nada Series. Here, he combines many layers of spray paint, opulent pastels, and delicate sumi-e brush strokes, and brings to life the soft, ambient vibrations of the universe. Variety comes alive in these mindscapes!

You are cordially invited to visit Shankar Gallery in Boulder, Colorado and view this extraordinary art in person. Those interested in meditation and self-inquiry will find peace and warmth in this setting. Investigate for your self whether it is the paintings, the Shiva Lingam Temple, or the many enlightened teachers and seekers who have visited and meditated here that create this remarkable space. Shankar Gallery is located at 1840 Violet Avenue, Boulder, Colorado.

Let this resplendent Art come to You! Purchase any of the original paintings by contacting Shankar Gallery directly by phone or email .

You may wish to fu
To further explore the art of S.S.Shankar, you may visit: